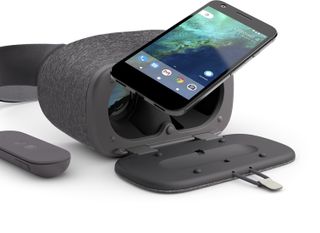 Cash-strapped virtual reality fans, listen up. Google just slashed the price of its Daydream View VR headset to $49 with free shipping. It was previously $79. That makes Daydream View the most affordable mainstream VR headset you can find.

Daydream View is a stylish VR headset that's covered in a light, breathable mesh rather than plastic like the Samsung Gear VR or cardboard like Google's $15 Cardboard VR. The headset can be powered by any Daydream-ready smartphone, which at the moment is limited to a handful of devices like the Google Pixel, Google Pixel XL, Moto Z, Moto Z Force, and ZTE Axon 7.

Preorders for the VR headset began on the first of November and although competitors like Samsung's Gear VR have a deeper catalog of apps and slightly better visuals, Google's Daydream View is still an exciting choice for users who aren't tied to Samsung or can't afford an Oculus Rift.

In fact, we found that the Daydream View delivered a promising catalog of VR content including Edge of Space 360, Hunter's Gate, and the WSJ VR App.

The sale is valid on all three models in Slate, Crimson, and Snow. The new price is good through February 25th, but don't wait too much as supplies may drain quickly.

Not to be outdone, Verizon Wireless has also dropped the price of the Daydream View to $49.99 with free shipping on all orders.