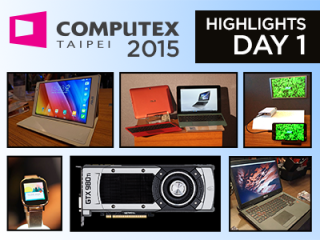 Computex 2015 is officially underway, and we've already seen a ton of great tech out of Taiwan. Asus offered something for just about everyone at its reveal event, including a new smartwatch, a high-end all in one and a smartphone tailor-made to take amazing selfies. Nvidia helped get the show off to an exciting start on the gaming front, with new G-Sync-enabled laptops for super-smooth gameplay and a beefy new GTX 980 Ti graphics card that can handle a future filled with 4K and virtual reality games. Here's the best of day one.

Are you an Android Wear fan with Apple envy? The Asus ZenWatch 2 might be the cure, offering a choice of stylish bands, an attractive water-resistant aluminum case and all of Android Wear 5.1's useful new features.

All-in-one PC usually sacrifice power for convenience, but Asus' new Zen series can hold its own with a high-end productivity desktop. These beefy new all-in-ones (available in 21.5 and 23.8-inch variations) each feature an Intel Core i7 processor, Nvidia GTX 960 graphics and second-generation USB 3.1 support for super-fast file transfers.

4K displays are becoming more attainable, and, as such, Nvidia is making sure as many gamers as possible get to enjoy ultra-high-resolution games. The company's new $649 GTX 980 Ti has more than enough cores to handle both 4K and virtual reality gaming, and the GPU will take full advantage of Windows 10's DirectX 12 to offer better textures and shadows than ever before.

The Asus Transformer Book is already one of the sexiest 2-in-1s on the market, and it's getting even better with the new T100HA model. This refresh is USB Type C compatible (just like the new MacBook), has a powerful Cherry Trail Atom processor and has an elegantly slim design that comes in four fun colors. The best part? It's set to sell for even less than its $350 predecessor.

Desktop gamers have long benefited from Nvidia's G-Sync technology, which syncs a monitor up with a PC's graphics card to eliminate nasty screen tearing. That same blissful tech will soon come to a host of gaming laptops, including a new version of Asus' already-excellent ROG G751 notebook.

There are plenty of pocket-sized smartphone projectors, but Asus' new E1Z model is the first to make it as simple as plugging your phone in via USB. The E1Z makes images from your phone look bright and beautiful when blown up on a wall, and the device can double as a portable battery for charging your phone on the go.

Mike Andronico is an Associate Editor at Tom's Guide. When he's not writing about games, PCs and iOS, you can usually catch him playing Street Fighter. Follow Mike @MikeAndronico. Follow us @TomsGuide, on Facebook and on Google+.