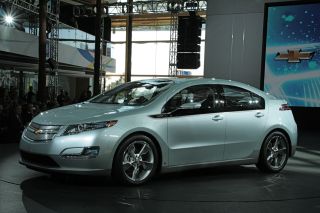 General Motors today unveiled in Detroit the 2011 Chevrolet Volt in a press showing the company says launches “its next 100 years.”

While the Chevy Volt has been seen in concept form since its showing in the 2007 North American International Auto Show in Detroit, today’s unveiling displays the production version that should reach consumers and roads late 2010.

What sets the Chevy Volt from other energy-friendly mainstream vehicles on the road today is its ability to run purely on electric power for the first 40 city miles after a full charge, making those miles completely gasoline- and emissions-free.

"Revealing the production version of the Chevy Volt is a great way to open our second century," said Rick Wagoner, GM Chairman and CEO. "The Volt is symbolic of GM’s strong commitment to the future ... just the kind of technology innovation that our industry needs to respond to today’s and tomorrow’s energy and environmental challenges."

For trips up to 40 miles, the Volt is powered only by its 16-kWh, lithium-ion battery. When the battery’s energy is depleted, a gasoline/E85-powered engine generator steps in to power the Volt’s electric drive unit while simultaneously sustaining the charge of the battery, which should extend the range of the Volt for several hundred additional miles.

A standard household 120v outlet will charge the Volt completely in about eight hours. With an industrial 240v, the charge time falls to a mere three hours.

GM estimates that a full charge for 40 miles will cost about 80 cents (at 10 cents per kWh), which equates to two cents per mile, comparing favorably against 12 cents per mile using gasoline (at $3.60 per gallon).

Besides the production exterior, the finalized interior was also part of the showing. While under the hood there is lots of technical whiz-bang, the interior is clearly one aimed at being cost-effective. Dual LCD screens highlight both the instrument cluster as well as the center dash. It would be unfair to call the interior unsightly, but rather it’ll be a matter of taste. If nothing else, the interior of the Chevy Volt appears to borrow more from consumer electronic appliances rather than conventional automotive dials and switches.

For a video explanation of the interior and other photographs, see Autoblog.

The Chevrolet Volt is expected to be built at GM’s Detroit-Hamtramck manufacturing facility late 2010. Pricing has not been announced.