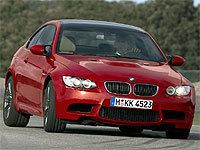 BMW this week announced that it will integrate Google Maps into its 2009 BMW Assist and Navigation system for the 1- and 3-series. Drivers will be able to search for nearby information on restaurants, hotels, service stations, banks, supermarkets, cinemas and public facilities such as schools or city halls – all through a keyword search. After finding a location, the user can opt to start a driving route or initiate a hand-free call to the business’ number, thanks to the BMW Assist service.

The BMW Assist and Bluetooth is already standard on all 5-, 6- and 7-Series models (excluding X3), including the M5 and M6, and is included in the Premium Package or available as a stand-alone option on the 1- and 3-series starting 2009 model year.

While many GPS systems already integrate such information, BMW’s employment of Google technology ensures consistently updated information. Rather than leave Google’s branding intact, the new service will appear as “BMW Search,” which the German car company was proud to call “the next logical and consequential development of the link between the automobile and the Internet.”

The next matter is, of course, how the BMW will maintain the Internet connection for constant updates from Google Maps. Given that the BMW service works in Europe on GSM cell technology, AT&T and T-Mobile were two choices for the U.S. market. BMW ultimately went with AT&T, but oddly enough, does not appear to be making use of its 3G network, but rather EDGE.

As for location-based services for Google Maps to suggest places near the car, it’s unknown whether the BMW Search will rely on cell tower triangulation, or if it’ll use the car’s built-in GPS (if equipped).

Using the AT&T network for data delivery will set the user back $199 per year, but will come packaged with the BMW Assist Convenience Plan, which will include BMW Assist concierge services for finding the lowest fuel prices, restaurants, flight arrival gates or times, as well as receiving directions, traffic and weather information, as well as other emergency services.