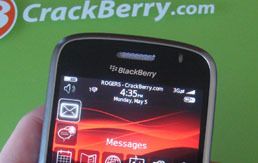 In late April Crackberry forum members noted that 3 pre-release BlackBerry 9000 had popped up in the UK. Two of three auctions were taken down immediately, oddly leaving one auction. While skepticism surrounded the auction and the phones, Michaluk has proven skeptics wrong with the delivery of a fully functioning BlackBerry at the price of $828 USD.

So far, initial impressions have been positive. The keyboard seems “pretty good”, with a similar keyboard approach offered by the 8700 and Curve series. The phone was loaded with OS4.6 and appears “smooth” and “pretty”. The display powered by a 480 by 320 HVDA Color LCD was described as “AWESOME”. Lastly, a 3G logo was discovered on the device — something not seen before and actually brought Michaluk to tears.

The BlackBerry 9000 is silightly wider and a bit heavier than previous RIM devices but should leave “every other BlackBerry made to date in the dust.” The BlackBerry 9000 is reported to make its debut with AT&T later this year in the U.S., but is being delayed due to call quality issues and the possibility of a conflicting launch with the 3G iPhone. Rumors of the BlackBerry 9000 began to swirl early January when a Vodafone roadmap was leaked.

In related news, HTC announced its Diamond Touch luxury phone today, featuring iPhone-like features and a glossy touch screen. HTC says its phone is far superior than anything currently available in its class, and is 3.5G ready, offering even better connectivity and speeds than Apple’s unannounced 3G iPhone.