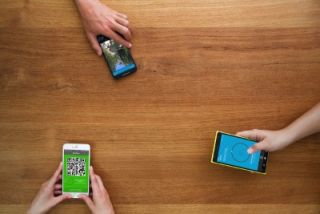 While BitTorrent might be most (in)famous for birthing the torrenting protocol used for peer-to-peer file sharing (legitimate or otherwise), it's also been busy finding new applications for that technology. Their latest release, BitTorrent Shoot (Android, iOS, Windows Phone) is an easy-to-use, free, multiplatform photo sharing app for quickly and privately sharing photos and videos to nearby devices.

Shoot is designed to be simple and no-frills, greeting users with a simple Send or Receive button in the main menu. When I pressed Send it took me to my device's photo gallery where I could choose what files I want to send. The app then spits out a QR code, which the receiver scans in, establishing a peer-to-peer connection for the file transfer.

There's no size limit for the transfer, so I could spit out high resolution photos and massive album photodumps. Sender and receiver will need to be connected to the Internet, and will need to keep Shoot in the foreground while transferring. Once that's done, photos and videos pop up in the receiver's gallery.

Besides ease of use, another useful feature is Shoot's cross-platform nature. For example, I could easily move snapshots between a friend's iPhone, an Android device and a relative's Windows Phone. Shoot is great for local photosharing because you can quickly pass around the QR code to be read by other people's camera phones. It is less then ideal for remote file sharing, where more traditional file sharing or syncing apps might be more useful.

Another consideration is privacy. Users skeptical of sharing private photos through cloud storage and sharing services or messaging apps might take some comfort in the fact that the connection is supposed to be private between the two devices. Shoot is ad-free, and allows users to transfer photos three times for free; unlimited transfers are unlocked with a $1.99 in-app purchase.