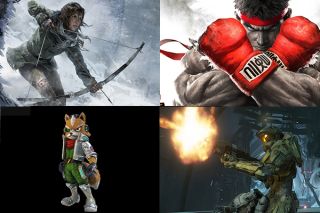 We came, we saw, we played a lot of video games. E3 2015 graced tens of thousands of attendees with one of the most exciting lineups in expo history. Microsoft showed us the future of Halo, Nintendo dished out charming titles big and small, and Sony announced PlayStation games that we still can't believe are actually happening.

Every corner of the Los Angeles Convention Center's halls was packed with something fun for everyone — from the epic, cinematic shoot-outs of Star Wars Battlefront to the vibrant, technical brawling of Street Fighter V. And with a final version of Oculus Rift and an insanely customizable Xbox controller, this year's event didn't disappoint on the hardware front, either. Now that we've managed to pull our paws off of the dozens of great games on the show floor, here are our top picks from E3 2015.

After a seven-year absence, the Fallout series made a triumphant return to the spotlight. Fallout 4 delighted audiences with the premises they've come to know and love, while being brave enough to innovate. In addition to open-world exploration and third-person shooting, Bethesda has introduced crafting into the series, allowing gamers to create their own thriving settlements in the unforgiving wasteland. The company could have stopped there, but it pushed the envelope even farther, introducing a second-screen experience that utilizes your smartphone and a working model of the famous Pip-Boy system. In November, Fallout 4 will be available for Xbox One, PS4 and PC. - Sherri L. Smith

MORE: Fallout 4 Preview: Back Into the Wastelands

With the launch of the consumer version of the Oculus Rift, founder Palmer Luckey and the crew at Oculus VR pulled out all the stops. The new Rift rocks a slick new design and a growing catalog of high-quality games from popular developers such as Insomniac Games and CCP Games. But Oculus isn't done being innovative. The Toybox software allows two Oculus-clad gamers to play with each other via a couple of prototype touch controllers that act as your hands. The result is a fun, immersive experience that shows off the headset's power while giving users a glimpse into the future of virtual reality. —Sherri L. Smith

Action-adventure game The Last Guardian has been in development for more than six years, but it looks like the game might finally come out in 2016. From Team Ico, the developers behind Ico and Shadow of the Colossus, The Last Guardian tells the story of a boy and his enormous, doglike griffin. The two must traverse an eerie, crumbling castle, with only piercing vocalizations and sparse music to accompany them. The Last Guardian is a gorgeous game that aims for some real emotional resonance, and should provide a unique experience on PS4 — if it really comes out this time. —Marshall Honorof

MORE: The Last Guardian is One of Sony's Hottest E3 Announcements

Traitor or hero? All bets are off in the next entry of the Halo series. In Guardians, Master Chief is being pursued by Agent Locke, a fellow UNSC Marine, for an apparent betrayal. But nothing is what it seems, so be prepared for plot twists and turns. When you aren't playing cat-and-mouse in the single-player campaign, check out Warzone, the game's new multiplayer mode. Two teams of 12 Spartans duke it out over extensive maps in a battle to capture the other team's base. When it launches, Guardians will be the best-looking Halo to date, with action that's fast, furious and fun.—Sherri L. Smith

It's been a long time coming, but everyone's favorite furry fighter pilot is back. Star Fox Zero brings the series' signature space combat to the Wii U, while introducing a unique dual-view mechanism that lets players steer their ships on their TV while using the Wii U GamePad's display to aim at enemies. You won't battle only among the stars, as your ship can transform itself into a Walker, a drone-like Gyrowing, or even a tank for fighting it out on the ground. Fox's beloved sidekicks Falco, Peppy and Slippy are all back, and most importantly, so is the ability to perform all of the barrel rolls your stomach can handle. —Mike Andronico

The original StarCraft debuted 17 years ago, and fans are still waiting to find out how the saga will end. In StarCraft II: Legacy of the Void, developer Blizzard Entertainment will finally reward fans' patience. Legacy of the Void is the third and final installment in the StarCraft II trilogy, and focuses on the mysterious and spiritual Protoss race. As always, the game will feature intense real-time strategy action; a sweeping, epic storyline about three warring intergalactic factions; and the most tightly balanced multiplayer experience on the market. Blizzard will even release a three-mission prologue campaign, Whispers of Oblivion, free for all players. —Marshall Honorof

I played a trove of shooters at E3, but none could match the massive scale or nostalgia-flavored joy of Star Wars Battlefront. This rebooted multiplayer shooter lets you relive the original film trilogy's most iconic battles, with beautifully detailed battlefields that support up to 40 players at once. Battlefront offers tight combat and iconic locations, such as Hoth and Tatooine, and lets you choke out rebels as Darth Vader. What else could you want from a shooter? —Mike Andronico

MORE: Star Wars Battlefront is Massive, and Tons of Fun

Gearbox Software is intimately aware that cooperative multiplayer is much more fun when each player has a wildly different skill set. That's why, in Battleborn, its new first-person action/role-playing game, there are 25 different characters from which to choose. Each character in Battleborn is a delight, from the futuristic fencer Phoebe, to the elven archer Thorn, to the military poster-boy Oscar Mike. The whole game is a mishmash of genres, from anime to fantasy to sci-fi dystopia, and Battleborn's zaniness is matched only by its addictive five-person gameplay, which is equally cooperative and competitive.  —Marshall Honorof

Following up on the critical acclaim of the 2013 Tomb Raider reboot, Lara Croft is back and taking the first definitive steps into once again becoming the hero fans know and love. The explorer is stronger and more confident this time, taking on huge bears with just a bow and arrow. Developer Crystal Dynamics didn't skimp on the graphics while imbuing Croft with a greater sense of urgency, offering breathtaking set pieces to offset the tense action. - Sherri L. Smith

MORE: Girl Conquers World in Rise of the Tomb Raider

Street Fighter V sticks to the core of what makes the famed fighting franchise great, while changing it in some significant ways. Iconic fighters such as Ryu and Chun-Li will feel familiar to series veterans, but Street Fighter V's new Variable System gives them access to exciting, character-specific perks, such as Ryu's ability to charge up his fireballs or Chun-Li's ability to temporarily make her combos hit twice as hard. Street Fighter V's endlessly strategic action is complemented by a beautiful, watercolorlike art style, and the game will bridge online communities by offering cross-platform play between PS4 and PC.—Mike Andronico

MORE: Street Fighter V is All About Variety

It's not often that a new controller debuts at an E3 news conference, but Microsoft's Xbox One Elite Wireless gamepad is something special. Built for the hardest of hardcore gamers, this $149 modular gamepad lets you switch among three different sets of thumb sticks and two different D-pads to vary levels of precision, with optional trigger locks that let you fire more quickly in your favorite shooters. The Elite offers more than just physical customization; whether you're playing on Xbox One or Windows 10, you can remap any of the controller's button inputs, allowing you to create the perfect game-specific profiles for all of your titles. —Mike Andronico

You've prepared to die. You've prepared to die again. Now, prepare to die again … again. Dark Souls III brings everything players love (and love to hate) about the brutally difficult action/role-playing game franchise to next-gen consoles. You'll fight grotesque monsters, master a wide variety of unusual weapons, and explore a world that's equal parts beautiful, haunting and deadly. Because Dark Souls III has been designed from the ground up for current-gen consoles and high-end PCs, the world is more intricate, the gameplay is more refined and the visuals are more striking than ever. —Marshall Honorof