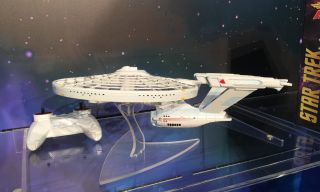 NEW YORK — BB-8 may be on D'Qar, the USS Enterprise-A may have been decommissioned and Darth Vader's TIE Fighter may have crashed onto the second Death Star, but you can awaken all three of these fan favorites as Spin Master's latest toys. The USS Enterprise ($120), TIE Advanced X1 Fighter ($70) and BB-8 ($180) will all be available this fall, and each comes with its own controller.

Spin Master mixed its universes, as we imagine many merchandisers will be doing in the coming year. After all, Star Trek celebrates its 50th anniversary and Star Trek Beyond is due out this year, and Star Wars Episode VIII filming has begun.

Aside from the fact that the saucer section of the USS Enterprise is exposed so its rotors can spin and float it into the air, this appeared to be an accurate replica of the ship that Kirk commanded through Star Trek IV, V and VI. The drone's rotor blades won't propel the ship to light speeds, but you won't need any Starfleet training to press the warp speed trigger on the remote control, which will blast the interstellar travel sound effects.

The high-density foam drone will have an operational distance of 250 feet from the remote controller, and last up to 20 minutes on a single charge.

You've probably seen the 2.9-inch Sphero BB-8, but that toy pales in comparison to the 16-inch BB-8 that Spin Master also introduced at Toy Fair. You use a joystick on the droid's remote control to roll it around your home, and its series of lights and sound effects will blink and play as it navigates your terrain. It also responds to voice commands, and can understand specific phrases. That means it will briefly chirp if you say "Hi, BB-8," and give more drawn out series of sounds if you ask a question like "How are you?" This BB-8 weighs 7 pounds, and its $180 price tag may be hefty, but its smaller counterpart from Sphero was a pricey $150.

Spin Master also introduced Darth Vader's TIE Advanced X1 fighter, which navigates more like an RC flier than a drone, as its propeller faces forward and is housed in the pilot chamber. This means you can't hover, but you can still navigate your backyard. Spin Master says it will be operational from about 200 feet from the controller.