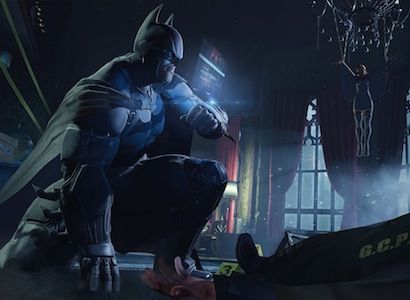 In the latest 'Batman: Arkham' saga, Warner Bros. Montreal takes the reins for a prequel that allows you to develop as that character does.

It's time once again to suit up as the Batman and put on the cape and cowl to take down the villains of Gotham City. In "Batman: Arkham Origins," players turn back the clock on the popular "Arkham" series, going to Batman's second year of operation as Gotham's vigilante.

The younger, less-experienced hero meets many of his popular rogue's gallery foes for the first time, showing how he went from scrappy vigilante to trusted superhero. Developed this time by Warner Bros. Montreal (the first two games in the series came from Rocksteady), "Origins" lets players become the Batman in a different way than in the rest of the critically acclaimed series. The player learns how to play while Bruce Wayne himself is learning to be Batman. The approach changes the implementation of tried-and-true gameplay while delivering a story that, surprisingly, feels more like the comics than the rest of the game series does.

This game is, at its heart, still an "Arkham" title. If you're used to the controls for movement and fighting from the prior games, especially "Arkham City," you'll have no trouble jumping right in. Warner Bros. Montreal has made no secret of the fact that they're using the same engine and assets as the prior games, with full access to previous producer Rocksteady's creations. They even give Rocksteady a substantial portion of the credits as thanks. There are new gadgets to play with, all of which have both combat and puzzle-solving uses. Gliding around the city moves pretty quickly, but if you have to get somewhere a little more quickly, you can travel fast via the Batwing — once you unlock the fast travel spots via Edward Nigma's towers.

Overall, gameplay is more of the same – in the best way. There are puzzles to solve, random crimes to bust up (that get progressively harder, keeping the challenge level high) and, of course, the major villains to contend with, from the Assassins to beyond. The freeflow combat is still some of the best hand-to-hand fighting in the business, and the new gadgets only increase the fun. Glue-grenading one enemy, shocking another and pulling the next toward you into a clothesline with the Batclaw keeps the variety going throughout gameplay. This runs about 30 hours (if you do about 50 percent or more of the side missions).

The game helps you master various parts of combat as you go, with each boss tuned mostly to a specific style. Bane requires dodging and stunning; Deathstroke is all about well-timed counters. Deadshot makes you sneak around in predator mode, and Firefly makes you attack via your long-range weaponry.

The puzzles have changed as well, both due to the new gadgets and a new detective mode that allows you to investigate and reconstruct crime scenes. It's a fun and effective way to bring in the actual crime-solving aspect of the character that first appeared in "Detective Comics." It both breaks up the action and helps you explore more of the city.

If there are flaws in this setup, they are the same ones that have existed in the last two games. The dodge mechanism is very touchy. It makes for several frustrating moments when taking on large groups of enemies, or the aforementioned boss fights that require the dodge as part of the battle. You don't always dodge in the direction of your thumbstick, instead sometimes just going whatever direction Batman happens to be facing – even if that means diving directly into the attack you were hoping to avoid.

Likewise, when you've progressed into the game, you'll meet large groups of varied enemies, each with their own specific disarm/takedown moves. This presents a very high challenge, and novice players or those who prefer to just play for the story should definitely play on the Easy difficulty level. You can't change difficulty once you've started the game, so be warned. Even Normal gets tough, and you should anticipate your level of struggle from the beginning. The good news is that, since the difficulty ramps up, you never feel like there's nothing new to do, and you always feel incredibly accomplished after a hard fight. When you defeat some of the assassins, like Deathstroke and Bane, for example, it is nearly impossible not to throw your arms up in celebration. You've done something very few people can do – you are the Bat.