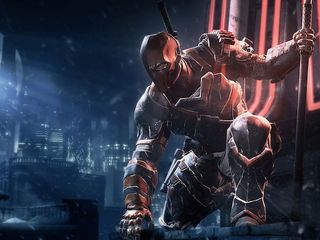 With less than a week to go before the highly anticipated video game "Batman: Arkham Origins" hits shelves, Warner Bros. Studios has posted a 17-minute walkthrough from the early part of the game online.

Ben Mattis, the game's senior producer at WB Games Montreal, and Michael McIntyre, the gameplay director, narrate the walkthrough and give background on the game's story.

The video gives us a brief tour of the Batcave, which looks like it'll serve as Batman's home base throughout the game.

Because "Arkham Origins" is a prequel and Bruce Wayne hasn't been Batman for very long in this story, the police believe him to be a menace, and they currently pose almost as much of a threat to Batman as the assassins and crooks.

"The very city [Batman's] trying to protect is really his greatest threat, and on this night, that threat has gone through the roof when all the assassins come to town," said Mattis in the walkthrough.