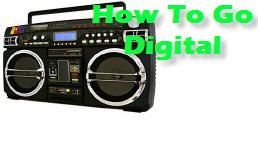 This series will show you how to convert your old media into a digital format. In the first article, grab your LPs and cassettes and we’ll give you a step-by-step guide for getting quality recordings that will surpass anything your CDs can offer.

When exactly did the Digital Generation begin? The compact disc became commercially available in 1982. I recall getting my first home CD player along with a Magnavox stereo system for Christmas in 1987. Then, consumers were torn between buying analog LP records or cassette tapes for cheap or the same albums on CD at a substantial price premium. Eventually, of course, the digital medium won out on the virtues of dropping prices and key technical advantages. CDs didn’t warp if you left them in the sun. They didn’t click and pop with continued wear and they were much harder to damage with scratching. Best of all, they didn’t hiss like tapes in quiet passages.

Audiophiles continued to frown on digital over the years, complaining that their precious LPs sounded better than CDs, with better sonic range and a warmer, more life-like feel. Those of us without crystal eardrums–which was nearly everyone–said CDs sounded better because they had less noise and digital soon triumphed in the market.

The analog vs. digital battle then moved to photo and video. It took 15 years for digital photography to move from invention in the mid-1970s to shipping consumer products in the early 1990s. The first time I ever reviewed a digital camera was in June of 1999, back when two and three megapixel sensors were cutting edge. At this time, anyone who wanted true photographic quality still shot analog film and slides for superior color quality and resolution. The arrival of the DV camcorder format in 1995, followed by MiniDV in 1998, likewise forced aside VHS, Hi8, and similar analog video camcorder formats, although still and video cameras remained at the mercy of evolving image sensors to provide high quality at affordable prices. Only in the current decade have these sensors reached the point where professional photographers and videographers were willing to abandon traditional analog media in favor of their digital successors.

We could argue that the Digital Generation truly began in this decade, probably around 2003 to 2004. By 2005, VHS sales represented only 15% of the home video market. Digital camera sales blew past film cameras in 2000. The driving market force today is the young and their voracious appetite for iPod and YouTube content. My children will probably never know life with analog–my oldest got his first Fisher Price digital camera at age five. My youngest, who is four, shoots photos and video with my BlackBerry phone.