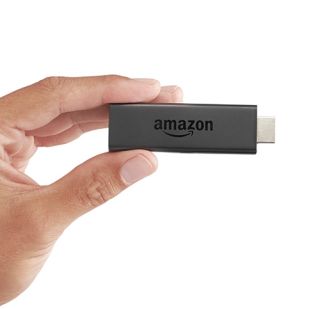 Amazon's Fire TV has its ups and downs, especially compared to other online video streaming devices, but the online retailer is not whipped just yet. Today (Oct. 27), Amazon revealed the Fire TV Stick: a less powerful version of the Fire TV with a convenient stick design and a lower price, at $39 than its boxy sibling, which sells for $99.

The Amazon Fire TV Stick went up for pre-order on Amazon today, and Amazon Prime members (including those who sign up for a 30-day free trial) can the device for just $20 if they order today or tomorrow. If you're familiar with the Fire TV, the stick does pretty much the same thing: It streams online media from a wide variety of services and plays a number of Fire TV-optimized games. All told, the Fire TV can access about 600 apps.

The Fire TV stick is smaller and cheaper than the Fire TV box, but also only about half as powerful. The device sports 1 GB RAM to the box's 2 GB, and uses a dual-core processor instead of a quad-core. This won't affect streaming media much, but may be bad news for Fire TV fans who want to game.

The Fire TV stick is missing two important things from the original device: an Ethernet port and voice search. An Ethernet port's importance depends on your home network setup and often won't matter, but voice search was one of the unique features of the Fire TV. If you want it, you'll have to buy the optional $30 remote.

Amazon also advertises that the Fire TV stick can screen mirror, like a Chromecast. The device will make use of Miracast protocols, with which Tom's Guide has had very mixed luck. Whether the Fire TV stick will function exactly as advertised or run into a whole host of problems, we'll have to wait until a full review to find out.

Beyond that, the device makes use of Amazon services, such as Whispersync to keep media synced across multiple devices, and X-Ray, which provides cast and crew information on video and lyrics on music.

The Fire TV stick will launch on Nov. 19, and Tom's Guide will have a full review posted as soon as we're able. Consumers generally adore the Chromecast and the Roku stick, so a new stick with a broader app selection and a similar price point might shake things up more than the original Fire TV.