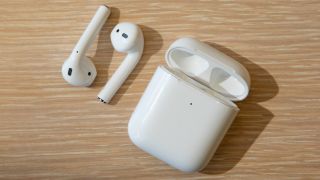 The Amazon Prime Day preview deals are getting better by the day.

Currently, Amazon has the Apple AirPods (2019) with Wireless Case on sale for $179.99. That's $19 off and the best discount we've seen for this bundle. (The new AirPods have been on sale before, but without the wireless case).

The 2019 AirPods look exactly like their predecessors, but they now feature an H1 chip which allows them to connect to your Apple gear twice as fast as the original AirPods. This is especially helpful for people who like switching between devices.

Apple AirPods w/ Wireless Charging Case for $179 ($19 off)
The 2019 AirPods are a no-brainer if you're committed to Apple's ecosystem. They've been on sale before, but this deal includes the wireless charging case. View Deal

However, the biggest changes are found in Siri and in how the new AirPods charge. Users don't have to tap twice on an AirPod to activate Siri, you just say "Hey Siri." This lets you use the AirPods hands-free.

There's a good chance these will be on sale again on Prime Day. But it's not likely to be significantly cheaper. So, we recommend getting this deal now rather than wait till Prime Day when it will likely sell out in minutes.