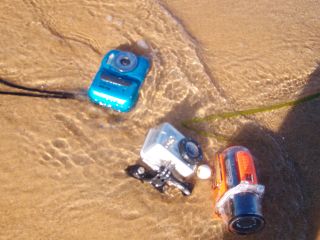 A New Generation of Sport Cameras: Did Someone Say Adventure?

Call it narcissism if you’d like, but anyone who loves extreme sports almost certainly want to see videos or pictures of themselves in the middle of the action. Camera makers have long realized that a potential market exists for these types of thrill seekers who want to see themselves on video or in photos, but until just a few years ago, quality cameras designed for the purpose were prohibitively expensive.

Now, thanks to plummeting sensor and other camera component prices, OEMs have been able to design and commercialize a new generation of affordable sport cameras with the action-sport enthusiast in mind. Among these are the Contour HD, GoPro Hero, and the Kodak Easyshare Sport, which I tested. I wanted to see what they could do while surfing, sailing, and driving fast cars. My 12-year-old daughter mounted the Contour HD and GoPro Hero on her bike to see what kind of video they could take while peddling along a dune trail above a sea cliff along the Brittany Coast in France.

During my tests, I judged the cameras’ qualities by the overall quality of the images they offered, ease of use, and very importantly, how robust they were. I also subjected the cameras to some abuse, which included burying them halfway in the sand on a beach and letting the waves pass over them a couple of times for the Ultimate Sea and Sand Abuse Test.

But the sea and sand test was just one way in which I abused them. In fact, two of the cameras got trashed along the way, although that was due to my negligence. I also almost lost the GoPro Sport when surfing.

Despite the mishaps, I did learn after my tests that you can take some breathtaking images and video when engaged in extreme sports with an investment of just a couple of hundred dollars. Cameras that allowed you to do that just a few years ago would have cost thousands of dollars. However, be prepared to lose a camera or two along the way if you are not especially careful.