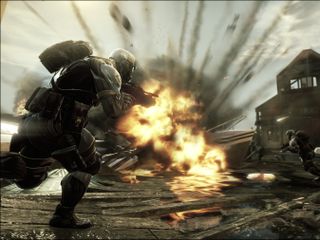 On the heels of 2K Games' announcement that Duke Nukem Forever is finally hitting shelves this May, Electronic Arts made a little revelation of its own Friday by revealing the upcoming multiplayer demo for Crytek's highly-anticipated FPS, Crysis 2.

While most of us have waited long and hard for a hands-on experience with the upcoming Crysis sequel, there's just one tiny little catch: the multiplayer demo is only on the Xbox 360 console. If that wasn't enough of an insult to PC and PlayStation 3 gamers, the demo will only be offered to Xbox Live Gold members starting January 25.

"The Crysis 2 Multiplayer Demo will feature the 'Skyline' map, and two game modes: 'Team Instant Action' and 'Crash Site,'" EA said on Friday. "'Team Instant Action' pits two teams against each other as they kill as many opponents as possible to earn higher ranks. In 'Crash Site,' players will battle for control of alien drop pods, earning points by guarding their pods and keeping enemies at bay."

EA said that the full retail version of Crysis 2 multiplayer will include six gameplay modes and twelve maps set across recognizable locations in New York City. Players can earn up to fifty multiplayer ranks and a variety of different upgrades to their weapons and their Nanosuit throughout the campaign.

Currently Crysis 2 is still on track for a March 22, 2011 North American release for the Xbox 360, PlayStation 3 and Windows PC. The game is also scheduled to ship across Europe on March 25, 2011. Gamers who pre-order Crysis 2 before then will receive a copy of the Limited Edition which includes a camouflage skinned SCAR assault rifle, early access to the Holo Decoy attachment, platinum Dog Tags, a Bonus XP award and more.

EA did not reveal any additional plans for a PlayStation 3 or Windows PC demo. That's just wrong (frown).