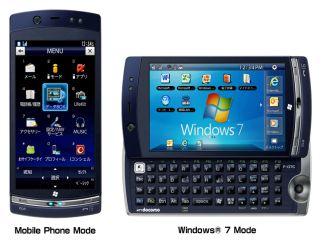 It's the world's smallest PC that fits into the palm of your hand, and it runs Windows 7. Not Windows Phone 7, but the actual 32-bit Japanese version of Windows 7 Home Premium (with SP1).... at least, that's what Fujitsu claims.

Thursday the company announced that its new F-07C mobile phone is slated to land in Japan from NTT DOCOMO beginning July 23, 2011. According to the company, the device comes equipped with basic PC functionality: an Intel Atom processor, the Windows 7 OS, a two-year Microsoft Office Personal 2010 license, and the latest version of Internet Explorer 9. On a smartphone. Users simply switch from mobile mode to Windows 7 mode with the touch of a button.

"By combining both PC and mobile phone functionality, F-07C opens the door to a range of new uses," the company said Thursday. "With support for Osaifu-Keitai, i-mode mail, i-concier, and other services from Docomo, as well as security features like Omakase Lock, the new mobile phone allows owners to take advantage of features that they are accustomed to using."

Fujitsu did not provide pricing or availability for territories outside Japan, but we've sent an inquiry to find out, so stay tuned.

UPDATE: We have an answer, and it's not good news. "Thank you for your inquiry," a representative replied in an email. "To answer your question, Fujitsu currently has no plans to market the Windows 7-based F-07C in the United States."