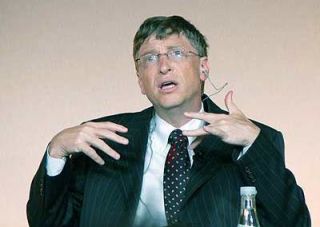 Microsoft founder and chairman Bill Gates told BBC's Hardball that he had a hand in the company's crazy $8.5 billion acquisition of VoIP service Skype by urging other board members to support the move. His revelation was made during an interview with Hardball's Stephen Sackur that's scheduled to air on BBC on May 18 (Wednesday).

The announcement of the Skype acquisition arrived last week after speculation that Facebook and Google was mulling over a Skype purchase. But Microsoft revealed itself as the mystery pursuer, and announced plans to integrate Skype into Xbox Live and Windows Phone while still supporting other platforms -- even Mac. The deal apparently had Bill Gates' personal seal of approval from conception to completion.

He added that the move was purely strategic. It wasn't about Skype's current profit (or lack of one), but how the service would benefit Microsoft's other products and services. Although he didn't specify, the acquisition is also a move to better position the company in competing with Apple's iPhone and its FaceTime service.

"The idea of video conferencing is going to get so much better than it is today," Gates said. "Skype actually does get a fair bit of revenue. It'll be fascinating to see how the brilliant ideas out of Microsoft research, coming together with Skype, what they can make of that."

"We will continue to support other platforms," he said. "We are one of the few companies that has the track record of doing this beforehand. We have done a lot of work bringing Office to the Mac and we’ve done a lot of great work with other Apple devices. Fundamental to the value proposition of communications is to reach people whether they’re on your device or not."

According to the company's official statement, Microsoft will connect Skype users "with Lync, Outlook, Xbox Live and other communities. Microsoft will continue to invest in and support Skype clients on non-Microsoft platforms."