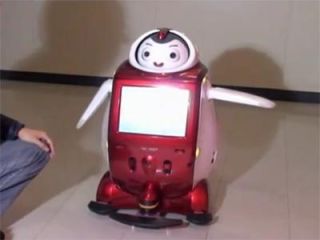 The Japanese and Koreans have been playing this strange game of one-upsmanship for quite a while. It's reminiscent of the US and Russia's Cold War antics, except with a lot less dead spies and a lot more robots. Yes, now that Korea's cars, appliances and movies have reached a bit of a stalemate with their Nippon counterparts, they've turned to Japan's number other top export, right after naughty anime: robots.

The latest Korean attempt to upstage Japan, who's had a pretty good run with horrifying human-faced gynoids, multitreaded tanks, and ninja robots, is a cute, penguin-looking thing called SIL-BOT. We're guessing the SIL stands for silly, because it's quite good at doing just that. It's got a highly-expressive cartoon face, and makes a strange attempt at dancing the Tango. Or at least, a tango between robotic penguins.