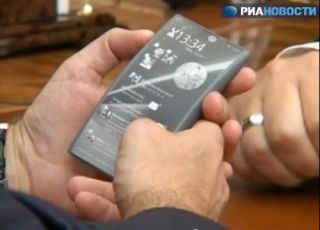 Unless you speak Russian, this video of Russian President Dmitri Medvedev and state technology official Sergei Chemezov having a nice wee chat probably won't mean much to you. However, you don't have to speak Russian to know that the device they're manhandling towards the end of the clip is like no other cell phone we've seen before.

Gizmodo translators say the device the lads are discussing is Russia's first domestically developed 4G phone, and as you can see from the prototype, it will have two displays. Nothing about availability is mentioned but we do know the device is to be manufactured by Russian telecom firm Yota. It's also not clear if both the displays will be touch sensitive or if the forward-facing display will be the only input method.

What would you like the second display to be used for? Let us know in the comments below!