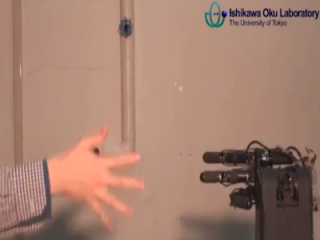 The number one rule of rock, paper, scissors is that you both have to show your hand at the same moment. No waiting for a split second to see your opponent's game plan. That's called cheating. However, if you're a robot with a high-speed camera, it's likely no will be able to tell you're cheating.

Researchers at the University of Tokyo have developed a robot hand that will win a game of rock, paper, scissors every single time. The researchers say the robot recognizes the position of the human hand and it takes just one milisecond to work out the upcoming play based on the position and shape of the human hand it's competing against. As you can see from the clip blow, speed doesn't seem to throw the machine off.

The experiment was carried out to demonstrate one example of human-machine cooperation systems. Cooperation. Right.