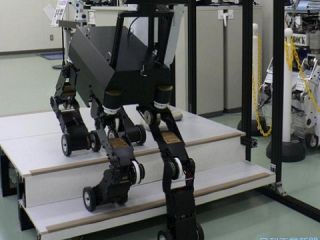 Those unfortunate enough to be both visually impaired and allergic to dogs might not be able to have a traditional guide dog, but thanks to Japan's NSK they will soon be able to have their very own miniature AT-AT walker. Japanese robot manufacturer NSK's latest prototype Dubbed the Robo-Dog,is capable of guiding the blind through flat terrain as well as over small obstacles and stairs.

The project has been around since 2005, but the latest prototype uses a Microsoft Kinect sensor to detect stairs and obstacles. Although the Robo-Dog moves sluggishly in the video, the robot has been designed to move almost as quickly as the person while moving up and down stairs. In addition to its usual guide dog properties, the Robo-Dog also features voice recognition, allowing the user to give audio commands for starting, stopping and basic movement.

Unlike its much larger imperial brother, the Robo-Dog is equipped with bumper sensors on each leg, allowing the robot to avoid crashing into things. Even if it somehow does somehow take a fall, Robo-Dog is designed to bounce right back up. Although having a robotic guide dog could prove to be an efficient guide, perhaps some would prefer the company of man's best friend.