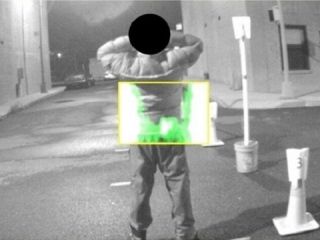 If you've ever felt violated at the airport thanks to all of those fancy body scanners and search mechanics, you might be unsettled to learn that the police are developing a mobile version of the full body scanners found in many modern airports. Such a device would allow the police to scan the streets from the safety of their cars without anybody even knowing about it.

Although it is being designed to help officers determine whether or not somebody is armed and dangerous, we have a feeling such a device might cause some controversy regarding privacy. Seeing as how some people are already upset about searches at the airport (a place we expect to be searched and scanned) giving police the ability to scan people anywhere without their consent or knowledge could be bad.

The project was announced earlier this week by NYPD Commissioner Ray Kelly who stated that the NYPD and the Department of Defense were able to create a successful prototype. The current prototype is only capable of scanning from a range of three to four feet, but Kelly is fairly confident the device will soon be able to reach up to eighty feet. If the project does continue and reach such a long range, we just hope the device produces images clear enough to differentiate between a firearm and an iPod.