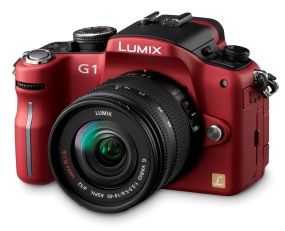 It was just a little over month ago that Panasonic and Olympus announced the Micro Four Thirds standard for digital cameras, planning an attempt to topple the reign of current DSLR-based designs. On Friday, Panasonic unveiled the world’s first digital camera based on this new standard, the Lumix DMC-G1. The camera features a 12.1-megapixel (effective) MOS sensor, a very useful articulated high-resolution 3.0-inch LCD display, an ISO of 100 to 3200, a relatively super compact body design and a weight of just 13.5-ounces.

The Micro Four Thirds system is based on the traditional SLR design in that uses interchangeable lenses, but reduces weight and size by eliminating the mirror box inside needed for an optical viewfinder. Instead, the new camera relies on a high-quality electronic viewfinder. The electronic viewfinder used features a gapless 800 by 600 resolution LCOS display running at 60 frames per second, with 100-percent coverage and large 140-percent magnification. While not having an optical viewfinder may still turn some off to this camera, it is one of the smallest and lightest cameras with interchangeable lenses available and there are many who will appreciate how its behavior is reminiscent to that of a consumer compact camera’s.

The camera also incorporates a fast new contrast-detect auto-focus with face detection, a Supersonic Wave Filter dust reduction system, pop-up flash, HDMI output, SDHC memory card support and a lithium ion battery. As mentioned, the camera has an articulated 3-inch LCD display, which can tilt and rotate, allowing a photographer to get those tricky shots with ease and also lets the LCD be folded away when not in use to protect it from damage. The Lumix DMC-G1 is also designed to use a new shorter lens design, with two compatible lenses announced for release. For those who wish to use larger lenses can still do so through the use of a lens adapter. The Lumix G Vario 14-45mm/F3.5-5.6 ASPH/MEGA O.I.S lens will be available as part of a body and lens kit.

The Panasonic Lumix DMC-G1 will be available in mid-November in three colors- black, red or blue. Pricing will be announced in early October, but it seems unlikely that this camera will be going for cheap. A consumer interested in an inexpensive alternative to this camera may appreciate the similarities found in the Canon Powershot S3 IS.