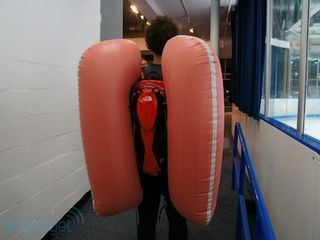 With snowboarding and ski season all but upon us, the North Face has just introduced a new breed of backpack aimed directly at those that love to take to the slopes this time of year. With built-in airbags, this backpack is supposed to help you out in the event that you get caught up in an avalanche.

Dubbed the ABS Patrol 24 Pack, this backpack comes with an integrated Avalanche Airbag Safety System (ABS) that will cause built-in airbags to inflate if you're trapped in heavy snow. According to Engadget, the system is all thanks to pro-snowboarder Xavier de Le Rue. Xavier was stuck in an avalanche four years ago and, having survived one, he didn't want to take anymore chances; he demanded that the North Face build the ABS system into his bag.

The system uses nitrogen canisters (as opposed to the CO2 used in cars) which inflate when the wearer pulls a starter leaver that screws into the strap of the backpack prior to before riding the slops. When inflated, the airbags provide 150 liters more body volume, equalizing some of the extreme density of the snow and helping bring you towards the surface. It also comes in a vest version called the ABS Vest. Both will be available in the fall of 2012, along with the ABS Patrol 24 Pack. Pricewise, the backpack will set you back $900 plus an additional $150 for the nitrogen tank and starter lever. You'll need to purchase a replacement $50 nitrogen tank every time you deploy your airbags, which should serve as a deterrent for just-for-fun deployments or pranks. Pricing for the vest isn't yet known.

Head on over to Engadget for a video demonstration and tons more photos.