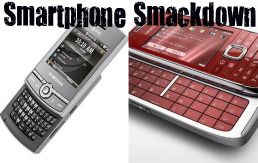 A Look At The Options

For many people, summer is the time to renew phone contracts, upgrade an old phone, or look for a new plan entirely. With so many hyped-up new phones on the market (such as the recent additions of the Palm Pre and iPhone 3GS) from which to choose, it's easy to forget that there are other smart phones worth considering.

So, knowing this, we’ve taken it upon ourselves to find the best smart phones that aren't from Palm, Apple, or RIM. For our first installment, we’re looking at Samsung’s Propel Pro and Nokia’s E75, both currently available for purchase after their launch April 14th and May 7th, respectively. The Propel Pro is an AT&T phone while the E75, like many of Nokia’s smart phones in the United States, is unlocked. For testing, we ran both on AT&T’s network.

Let’s take a quick look at what both phones have to offer: