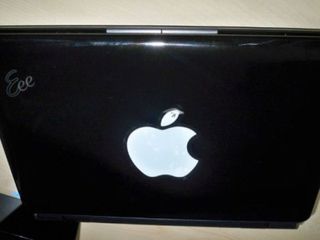 Why A Netbook Hackintosh?

I'm writing this article from the comfort of my new "hackintosh netbook," an Asus eeePC 1000HE that I bought from Newegg for $425 shipped. You could knock about $100 off of that if you didn't include a 2GB RAM stick ($42) and an external DVD drive ($50), but I did buy those things.

Compared to my 18-month-old MacBook that I’m used to, the keyboard feels a bit cramped, but the Asus is significantly quieter, lighter and easier to handle than my standard machine. It also cost less than half the price.

This project came about as my wife and I were talking about the merits of getting an iPad. See, she has an older, iBook G4 -- and mainly uses it for basic tasks: Internet, music, movies and Microsoft Office. But video isn't always reliable on her machine. Hulu, for example, runs noticeably smoother on my MacBook than on the iBook G4. We'd thought about the merits of an iPad, but after checking with some of our iPad-toting friends, there still isn't a good full word processing suite (like Microsoft Office) for the iPad.

Sure, there's Google Docs, which for most basic tasks like writing and simple editing is fine. But my wife, as a teacher, is constantly having to use things like footnotes and track changes within the documents -- something that free online alternatives don't yet have. Also, printing from the iPad isn't quite as easy as it should be, yet. So the iPad was out. Even with my add-ons including the DVD player (my wife likes to watch borrowed DVDs of "House"), the netbook was still under the iPad base price of $499, and instead of a 16GB flash drive, I would get\ a 160GB just-as-quiet hard drive.

As far as OSes go, I had basically three options: 1) keep Windows XP as it came factory installed ; 2) Install some flavor of Linux (a friend has been bugging me to try Ubuntu) ; 3) Install Mac OS X. Given that I know OS X best of all, and that all the other devices in our home are Macs, it seemed the logical choice. Plus, given that I’m the one-man IT department for my home, it’s the OS that I know how to fix. Plus, it would be a fun to see if I could make it work!I'd heard about people installing OS X onto netbooks, and came across this handy compatibility guide. In short, everyone who’d tried it seemed to suggest that the simplest and easiest option was to buy a Dell mini 9. Sadly, Dell doesn't sell those anymore. So, after careful consideration of price, size and battery life (a main selling point for netbooks), I settled on the Asus eeePC 1000HE. At just $289, it's cheap, and boasts over nine hours of battery life (with the Windows XP that comes pre-installed and most important of all, according to the handy chart in the compatibility guide, it supports all of the main functions (even on this unauthorized hardware), including WiFi, sleep, sound, and all the rest.

See, that's the thing with creating a hackintosh netbook.–There are a lot of very specific options, software settings and instructions to follow. There are specific guides for specific models, all of which have particular instructions as to how to get all the options working. Even then, there still are some kinks to be worked out. For example even now after I’ve finished the complete installation, when I close the netbook to put it to sleep, instead of choosing sleep from the Apple menu, sometimes the computer will crash. But other than that, it's a long-lasting, quiet little Mac.

Now, before we get started, remember that installing Mac OS X (even a legitimately bought copy) may violate the end-user license agreement (EULA), as Apple doesn't want you installing its OS on non-authorized hardware. Also, if something goes wrong, don't even think about taking your hackintosh to your local Genius Bar. You're on your own. Tom’s Guide, too, takes no responsibility for your actions. That said, we hope you find this article helpful and interesting.

Ready to take the plunge? Good.

One more warning: these instructionsare specifically for how to install Mac OS X 10.6.0 onto a brand-new Asus eeePC 1000HE. I haven't tried upgrading the OS beyond that, nor have I tried using other models, so don't ask me about them. Any other questions are fair game, so feel free to weigh in below.

Current page: How To: Turn A Netbook Into A Hackintosh

Next Page What You Need