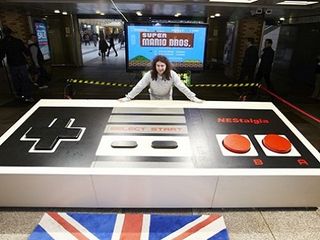 Celebrating the launch of the Guinness Book of World Records Gamer's Edition 2012, the company invited engineering students Benjamin Allen, Stephen van't Hof and Michel Verhulst to bring their massive NES controller to London's Liverpool Street Station. Weighing in at approximately 265 pounds and 30 times the size of a standard NES controller, the creation is also fully functional.

Though you'll see people using the 12 foot long controller by pressing with their hands, it is supposedly strong enough to be jumped on as well. The three students from the Delft University of Technology in the Netherlands took approximately five months to plan the project and finished building the controller in one month.

Because of the controller's sheer size, the traditional hardware found in the original NES controller had to be substituted with a light-based system. When one of the controller's massive buttons are pushed, a beam of light is broken and a sensor communicates with the NES to provide the appropriate response. While an original NES controller can be found for just a few bucks, this version cost roughly $6,000. For more information on the project or more ridiculous records, head on over to the Guinness Book page here.