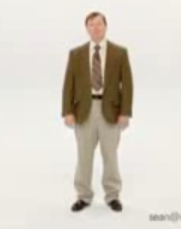 The new ad, as reported yesterday, is a more direct approach to selling their product. The first couple of ads mentioned Microsoft only briefly and the was no mention of PC at all. It’s repetitive but refreshing to hear, “I’m a PC,” seventeen times inside one minute when before all we had was, “You ever wear clothes in the shower, Bill?” Indeed the appearance of over a dozen every day people and celebrities makes the third Microsoft ad a lot more effective but a lot more, well, commercial. A lot of people miss the Seinfeld ads just because they were weird, pointless and unlike anything else you’d see during an ad break — but that the Bill and Jerry commercials give way to something more effective was part of the plan, right?

Yesterday the news was that the Bill Gates and Jerry Seinfeld skits were just a buildup to what would be a more conventional commercial. Almost everyone (guilty as charged) heaped praise upon Microsoft for getting viewers attention, keeping them talking and then showing them the goods when they didn’t expect it. Unfortunately it seems like that might not be the case.

Apparently a source from the ad agency responsible for both the Seinfeld and I’m a PC commercials, Crispin Porter + Bogusky, told Gizmodo that the agency was told to focus more on the I’m a PC ads rather than the Seinfeld ads. The source confirmed that there is another episode of the Bill and Jerry Show filmed and ready to go but it won’t be aired just yet and there’s no confirmation as to when it will air. So, just when we thought Microsoft was daring to be different, it gets snatched away.

It’s no secret that the original ads got a lot of criticism. After the first everyone was confused, after the second we were a little confused but also a little proud that Microsoft had the bottle to stick it’s neck out, say, “Right, we might not be cool, we might never be cool but no one said we couldn’t be different,” and roll with what it had planned. Sure, the company planned the I’m a PC segments, that much is obvious and yes, they are good ads but they’re no different to ads for insurance or cereal.

Check out the ad below and let us know what you think. We also found another ad which is more than likely next in line for airing. Notice how hearing, “I’m a PC,” 33 times in 90 seconds starts to sound like, “I’m pissy,” or maybe that’s just us.