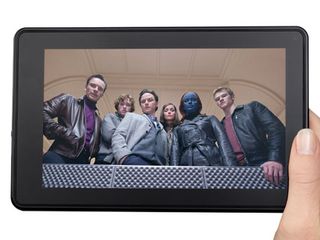 In the typical "unnamed" fashion, industry sources are reporting that Amazon's next Kindle Fire tablet will arrive by the end of the second quarter in 2012.

As previously reported, this device will supposedly be Amazon's "flagship" device with better hardware, a larger screen and more features than the current $199 model. But sources are now claiming that the screen will measure 8.9-inches thanks to a push by LG Display and Samsung. Amazon also wants to avoid competing with larger products offered by other vendors. Still, this tablet may be the previously-rumored dual-core "Coyote" based on Nvidia's Tegra 2 SoC.

According to reports, Foxconn will begin ODM (original design manufacturer) production of the new 8.9-inch Kindle Fire model in the middle of 2Q12. The company has also reportedly signed on as a second ODM of the current 7-inch Kindle Fire next to Quanta Computer, and will go into mass production in the first quarter of 2012. Naturally Foxconn has declined to comment on both reports given that no official announcements have been made.

After the launch of the 8.9-inch device next year, Amazon reportedly plans to release a 10.1-inch Kindle Fire tablet by the end of 2012. This tablet, codenamed "Hollywood," will be based on Nvidia's Tegra 3 "Kal-El" quad-core SoC. Given that the super-powered system-on-a-chip is currently making its debut this holiday season, there's a good chance "Hollywood" will be super cheap by the time everyone brings out the turkey cutting utensils again next November.

Seriously, who are all these unnamed "insiders" and do they wear trench coats and carry locked briefcases?