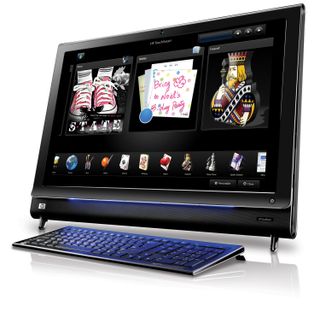 Dell and Gateway also offer all-in-one machines, but HP offers the largest screen by far (the Dell XPS One has a 20-inch monitor with 1680x1050 resolution and the Gateway One ZX190 19-inch screen with 1440x900 resolution) and is the only one capable of displaying true HD video. HP is also the only mainstream manufacturer offering a desktop PC with an integrated touch screen.

The IQ800 series can do double duty as a TV, but it’s interesting to note that HP is not offering a CableCARD tuner that would allow consumers to connect the machine to digital cable-TV service. The machine is equipped with a dual-format NTSC/ATSC HD TV tuner, however, so it can be connected to the analog output of a cable or satellite TV set-top box.

CableCARD got off to a very rough start last year, and there is still no comparable technology available for satellite TV. The decision of a mainstream PC manufacturer such as HP to not include the technology in an otherwise perfectly suitable product could signal CableCARD’s death knell. It’s doubtful that service providers such as Comcast will mourn CableCARD’s passing, since they agreed to support only only after the U.S. Federal Communications Commission ordered them to. Comcast and their ilk would much rather force customers to buy or rent the hardware they provide.

Both machines will feature integrated 802.11n wireless networking, a gigabit network interface, integrated Bluetooth (used primarily for the wireless mouse and keyboard), a built-in webcam, and a five-in-one memory card reader. HP is installing the 64-bit edition of Windows Vista Home Premium on both TouchSmart models.