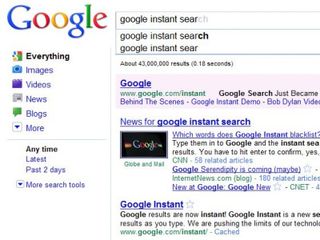 It’s no secret that Google is synonymous with search. Think about it…how often do people say “let me search for that?" The popular phrase is always “let me go Google that.” Google made two major announcements last week. First, the search and ad giant announced that it was now serving up over one billion searches per week worldwide, which officially makes the site the McDonalds of the Internet (minus the terrible food, of course).

The other big news came in the form of Google Instant, which takes Google up yet another notch above the competition. Displaying results in real-time might not strike you as a big deal, but believe us when we say Google has, yet again, redefined how you use the Internet.

Next Page So, What Is Instant?
6 Comments Comment from the forums