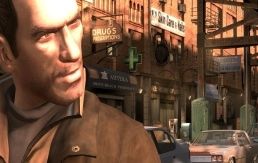 The GTA franchise has, previously, been a PlayStation hallmark and near-exclusive, though all of this has changed recently to the extent that the Xbox version will be getting exclusive future content that Sony fans will have to go without. The sales data for the fourth instalment in the franchise indicates that a lot of PlayStation faithful went out and bought the game, whilst some Xbox users are perhaps still waiting to be sold on the idea.

Speaking to Newsweek, Microsoft director of product management Aaron Greenberg said “I think many people have been surprised to see how well GTA IV is selling on Xbox 360 given the history of the franchise. These sales results add GTA IV to a long list of franchises that have switched over from Playstation to find a new home on Xbox 360 similar to what happened last year with titles like Madden and Guitar Hero.”

The Sony folks countered with PlayStation senior vice president of marketing Peter Dille, who commented “GameStop probably does a little bit better with the early adopter crowd. There’s a larger installed base right now on Xbox 360 than on PS3. So it’s not surprising that there’s going to be more selling on Xbox 360 than PS3.

“Having said that, we’re really excited about the ratio. If I had an installed base advantage of 3-1, I wouldn’t be crowing too much about a 60-40 sales advantage. We think it’s not as high as what GameStop’s telling you, if you look at [the full picture on] the national level. They’re outselling us, but not by that same margin, and it’s because of their installed base lead.

“With an installed base lead that’s close to 3-1, if you’re bragging about a 60-40 software split, it’s clear evidence that the Playstation 3 consumer is overindexing on GTA IV, and the Playstation brand loyalty that we’ve been talking about is bearing itself out in the marketplace as we speak.”