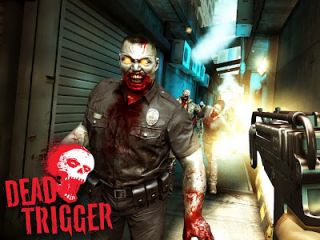 Mad Finger Games is now claiming that it was forced to offer its latest Zombie-infested title, Dead Trigger, for free because Android piracy is "unbelievably high." Previously the app was offered for a mere $0.99 on Google Play while also utilizing in-app purchases so that gamers could progress faster.

"At first we intend to make this game available for as many people as possible - that's why it was for as little as buck," the company said on Facebook. "It was much less than 8$ for Shadowgun but on the other hand we didn't dare to provide it for free, since we hadn't got XP with free-to-play format so far. However, even for one buck, the piracy rate is soooo giant, that we finally decided to provide Dead Trigger for free."

The in-app purchasing system still exists, but players can complete the game without having to make a purchase, the company said. "All players are able to play it without IAP! We stand up for this statement, because all members of our team are playing (and enjoying) Dead Trigger without IAP."

Is piracy really that rampant on Android? Because of the platform's open-source nature, users can easily install pirated games on their device by simply allowing non-Market apps. Even more, there are apps offered on Google Play that allow users to back up their apps onto a PC, thus making it easy to distribute. There are even social apps listed on Google Play that feature app trading.

Eurogamer reports that Sports Interactive boss Miles Jacobson made a similar complaint earlier this year, saying that pirated copies of Football Manager were being downloaded at a ratio of 9:1, compared to the purchased versions. He pointed out there's no working copy protection on Android, so it's simple to install the pirated app and jump right into the game without having to pay a dime.

"The platform is also very popular in some countries where there's a larger piracy problem than in others," he said. "It's really disappointing that there are so many people out there who love our work, and spend countless hours being entertained by it, but don't think we deserve to get paid for that entertainment. There are no excuses for any form of piracy - if you don't want to pay the price set for a game, don't pay it, and don't play it! Gaming is an entertainment form, it's not a human right."

A study conducted by Yankee Group and Skyhook revealed last year that Apple customers download six times more paid apps than Android consumers. It also showed that Android developers make "much less" money from the sales of paid apps than Apple iOS developers -- 75 of those developers blamed the loss of revenue on "rampant piracy." 53-percent of those developers said Google is "too lax" on its Android Market policies, whereas 27-percent saw Android piracy as a "huge problem."

Currently the iOS version of Dead Trigger still remains as a paid download on iTunes.