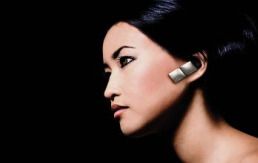 The Lineup: Aliph, Jabra and Motorola

The odds are increasingly likely that you live in a state that requires (or will soon require) drivers to use hands-free cell phones. If that wasn’t enough to entice you to buy a Bluetooth headset, perhaps it’s the annoying shoulder straight or earache that sometimes accompanies pressing your cell phone against the side of your head for hours. Or maybe you’re one of those, um, confused people who goes around carrying on a cell phone conversation in speakerphone mode, handset held up close to your mouth as you walk around. (Seriously? Did you not get enough attention as children? Do all of you have busted earpieces in your phones? Really, it’s just a few more inches to your ear.) Whatever your reason or motivation, this is a great time to take a fresh look at Bluetooth options.

We specifically set out to find the best, brightest, and most recent Bluetooth communication devices launched during the last three months—meaning the products that probably missed the entire stocking-stuffer holiday buzz. We found seven that fit the bill and lived with them for two weeks, rotating them among family members through a wide variety of environments and usage scenarios. Bluetooth devices are one of the hardest tech product groups to review because they’re so subjective. Some people have less discerning ears than others when it comes to noise, clarity, and fidelity, and everybody has different shaped ears, so what one person thinks is comfortable will itch and ultimately pain someone else to no end. We’ll try to offer an average of our tester’s impressions in the following reviews. Just be aware that your mileage may vary.

Interested in a quick take-away? Below, we've included a chart of the over-all score each Bluetooth device achieved.