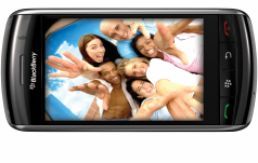 Instead, the on-screen keyboard uses what RIM calls "tactile-touch" feedback that it claims offers "easy and precise touch screen typing." In fact, its a spring-loaded touchscreen that acts like a big button — a departure from the haptics-based touchscreen technology currently available to consumers.

Throughout the summer and into early fall, gadget blogs were abuzz about the new Blackberry that eschewed a keyboard but incorporated a touch screen that could best Apple’s through tactile feedback. Tipsters and analysts mulled over the scarce data available about the new phone and deduced that it would use “haptic” technology: a series of little motorized bumps that let you know you just hit a key. After all, the Blackberry already had vibrating tech built-in, as does nearly every phone on the market that can be set to buzz instead of ring. Apple’s phone slows you down because you don’t feel the feedback in your hand, but this Blackberry would give you signals.

This seemed plausible to everyone — including Tom’s Guide — because several handset manufacturers have already turned to haptic feedback to make touch keyboards more usable. Many of them use San Jose-based Immersion Corp.’s VibeTonz technology to get finer control of the vibration than just turning it on or off.

But everyone was wrong. After RIM officially launched the Blackberry Storm on October 8, the company began divulging more details about its new phone and correcting assumptions about the touch screen that everyone had been making for months (for more details on the pre-launch rumors, see page 6).

RIM didn’t incorporate the common vibrotactile haptic feedback into its Storm — instead, the company revealed on October 9 that the whole screen clicks like a big button.

Why is RIM taking this different approach? Why did so many people assume RIM would use vibrotactile haptics? And why do you need mechanical feedback on a digital touch screen anyway?