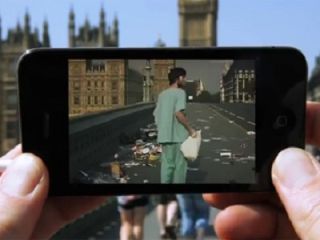 If you're a fan of films and you have a smartphone, you should definitely keep an eye out for the (hopefully) soon to be released AR Cinema app. Tourists who have been to popular cities such as London, New York, Los Angeles or Paris may be surprised to learn how many films were shot in the exact places they were standing. By utilizing a smartphone's GPS and camera, this augmented reality app brings movies to life in front of the user's eyes.

True movie fanatics may be able to recognize areas that were used in films, but being able to watch the exact scene unfold in front of their eyes could be quite a satisfying experience. The user simply has to visit a landmark where a scene was shot, hold up their smartphone and the AR Cinema app pulls up the exact scene that was filmed in that particular location. Although the demo mostly shows scenes from London, the developers are hoping to add more cities and locations before the app's official release. No date has been given yet but you can visit their site here to sign up for the newsletter.