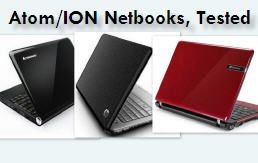 The Truth about Netbooks

We all know that netbooks are small, underpowered, and inexpensive laptops, good for stowing in a backpack and using while running around town all day. The best ones feature excellent design and long battery life. However, netbook performance only starts to matter if the machine is too slow for the very basic tasks the machine was designed to do, like Web browsing and word processing.

But why shouldn’t a netbook be able to do more? Ultimately, what every mobile user wants is a  10” or 12” netbook that is as powerful as today’s expensive 17” laptops or even desktops. But in attempting to drive down prices as low as possible, netbook manufacturers haven’t made better-performing, tiny form-factor machines a priority.

A few manufacturers have catered to a group of consumers looking for high-performance and small form-factor machines. These small machines are called ultraportables and they typically feature the same performance as standard laptops do because they run the same hardware. Factor in reasonable battery life and these tiny computers come with huge price tags. However, a new technology is emerging that is supposed to bridge the gap between these two extremes.

Nvidia is determined to reconcile the underpowered netbook and the overpriced ultraportable with Ion-based graphics. Ion is a chipset that uses the traditional netbook Atom CPU to run netbooks far more efficiently and powerfully than Intel chipsets can. Ion has a built-in graphics processor for netbooks, allowing the graphics processing unit (GPU)-enabled applications to run faster. Such applications are increasing in number every day—you can find them on most PCs. Even Windows 7 takes advantage of the GPU.

Other publications have already shown how Ion-based netbooks outperform other netbooks, but we don’t see these underpowered computers as the future of low-cost, small-form factor computing. If writing about computers for years has taught us anything, it is that prices will always go down but performance will always go up.

It makes more sense to compare the first Ion-based netbooks to a similarly priced ultraportable. So that’s what we’ve done.  We’ve pitted the HP Mini 311 and Lenovo Ideapad S12—both Ion-based—against the Gateway EC1437u budget ultraportable, which has an Intel GS45 graphics chipset. The outcome of this matchup should give us insight about which platform holds more promise for the future and whether ION really does bridge the netbook-to-ultraportable gap.

Previously, the difference between a netbook and ultraportable was performance and price. In this test, we determine if that line has blurred.