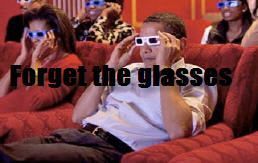 You can’t spit on the CES convention floor without hitting a 3D HDTV. To some, this is cause for excitement. For me, it is cause for Advil. Watching a 3D movie or television set isn’t pleasant due to the glasses required to see the stereoscopic image. I know I’m not the only one who finds the experience uncomfortable.

But discomfort—headaches, eyestrain, nausea—isn’t the only problem with 3D glasses. If we all had 3D TVs in our homes, how many glasses would we buy? Six? And what if one day there were seven people in your living room? What if you lost a pair? 3D glasses are inconvenient at best, and disruptive at worst.

Before attending CES, I knew there had to be another way. Turns out, there are several ways. This week, I sought out companies who are attempting to bypass the 3D glasses issue with a variety of technologies, each usually referred to as “auto-stereoscopic.”. None of them are perfect, and nearly none of them are available commercially—but they all hold promise. I, for one, hope the marketplace adopts a non-glasses approach to 3DTV. More on CES 2010

Not many manufacturers are yet investing in the no-glasses 3D system, and all of them are very hard to find on the show floor. In fact, we never did find two manufacturers who were supposed to be present. The first is Magnetic 3D, which makes monitors ranging from 22 to 42 inches that could be used for gaming (this line is called the Emersa series). The second is NEC, which is working on a 12.1-inch auto-stereoscopic 3D display for the Japanese market, and also will make displays as small as 3.1 inches. In general, most of the companies looking to enter the non-glasses 3D market are first approaching it from the retail and commercial perspective: screens that show advertising in public spaces, rather than in products designed for the home market.

The first no-glasses-required set we actually managed to spot on the show floor is made by a Chinese company called TCL. A loop of animated 3D cartoons played over a honeycomb of 3D sets. The 42-inch TD-42F is already on the market in China, says TCL 3DTV Project Marketing Manager King (no last name). It sells for about $20,000. It works like this: there are actually eight lenses on the screen itself. Depending on where you stand in relation to the TV, you see only a few of those perspectives. This “lenticular” system is popular in all the 3D systems with no glasses that we saw. TCL’s TV set only displayed animation on the show floor. Looking at live-action would’ve been a better test of the set’s potential for eventual home use. The 3D aspect of the screen did not “pop” forward as much as, say, the flying fictional beasts in the showing of Avatar I saw last weekend. The up-in-frontness of it was much more subtle here.

Next, I checked out a prototype at Samsung’s booth. The 50-inch display has a very wide viewing angle, and I could see 3D cartoons no matter where I stood in front of it (again, no live action footage). The images on screen looked very similar to those on the TCL set. Personally, I don’t see a downside to a 3D world where bullets don’t look like they're two inches from your nose—those kinds of special effects are cheesy, anyway. I want 3D images to enhance my experience, not distract me with flashy flying objects that make me gasp. Samsung’s prototype is made for commercial use, and the company has not announced plans to make this prototype into a product for home use.

Current page: Give Me 3D TV, Without The Glasses