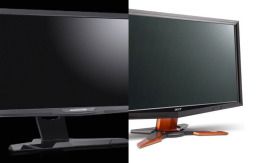 3D displays are all the rage, as we saw at the Consumer Electronics Show (CES) earlier this year. Stereoscopic vision is slowly creeping into movies and will soon make its way into the living room with 3DTV sets and different technologies for viewing those televisions.

One of the larger players in the 3D space, Nvidia released its stereoscopic solution over a year ago. It is known as the 3D Vision and is made up of shutter glasses that only work with a television or computer screen that can output at 120 Hz or 120 frames per second (FPS). Since it requires the use of a powerful Nvidia graphics card, this means all 3D Vision tech revolves around the home computer.

TV manufacturers including Samsung, LG, and Panasonic are developing 3D technologies for LCDs, However, only two LCD displays with 120 Hz support have hit the market and they’re small at 22”.

A major development took place at CES when Acer and Alienware, now partnered with Dell, announced their own 23.6” 3D-ready displays. These are full HD monitors, compared to last year’s 22” displays from Samsung and Viewsonic.

Our experience with 3D gaming is that it works, but that a larger screen is necessary to truly appreciate the addition of depth. While 22” displays are simply too small and the quality hasn’t measured up to that of non-3D capable monitors, Acer and Alienware aim to change that. Acer’s GD235HZ and Alienware’s OptX AW2310 are both 23.6” displays with nearly identical specifications. They retail for $399 and $499, respectively, and as you’ll read, the price plays a huge role in the differences between these two models, although you may be surprised by the results.

Next Page 3D Gaming: What You Need to Know and to Play