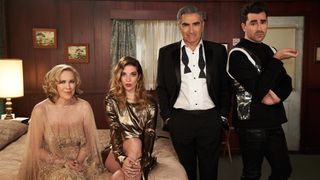 Still trying to figure out how to watch Schitt's Creek online? Yes even though the Levy’s show blew up on Netflix, big red won't get Schitt's Creek season 6 for a while (quite a while depending where you are). Fortunately, many can still watch this season live.

Those in Canada have it really easy, while those in the U.S. may need to switch their live TV streaming service to beat Netflix to the Rose family's latest misadventures. But don't worry if you're out of town — or even on an extended vacation — you can still watch Schitt's Creek online if you're out of the country.

Already caught up and wondering what to expect? Well, we're headed down the aisle, as the wedding of David Rose (Dan Levy) and Patrick (Noah Reid) is the centerpiece of the ads for this new season. Levy told Variety that the season 6 premiere takes place  "two weeks after the episode they just watched. It's the morning after the wrap party of the two week run of Cabaret."

More compellingly, though, Levy listed Six Feet Under and Friends two of this season's influences — which leaves me seriously intrigued. Fans of the former will remember Six Feet Under's iconic ending, where Sia's "Breathe Me" played over the stories of each character's final moments. Levy said those episodes have a common thread: "Give the audience what they want but also give them something new and expected that doesn’t feel outside of the show."

How to watch Schitt's Creek season 6 anywhere, with a VPN

Americans aren't up a proverbial Schitt's Creek if they're out of town and away from their TV. Watching the final season along with the rest of the internet can be pretty easy with the right VPN (virtual private network), you can stream the show from wherever you go.

Our favorite VPN service, ExpressVPN, really shines thanks to its safety, speed and simplicity-to-use. It's also compatible with loads of devices - from iOS and Android to Roku, Apple TV and PlayStations. You'll even get an extra 3 months free if you sign up for a year, or there's a 30-day money-back guarantee if you just want to give it a try.
View Deal

How to watch Schitt's Creek online in the US

There's only one way to watch Schitt's Creek season 6 online in the US: the Pop TV channel. While it's available on premium satellite and cable packages — and I would know, I've paid a pretty  penny to upgrade to get it — you can catch Pop even if you've cut the cord. But only on one service.

That's YouTube TV, the only live TV service with the Pop network. Right now, you can get two weeks of YouTube TV for free, and the service costs $49 per month afterwards. That might sound like a lot, but it's also got 78 other channels, plus an unlimited cloud DVR.

If Pop is a part of your cable or streaming package, you might be able to log into the Pop iOS or Android app to watch live via their app. Tap the Menu icon and tap Settings and tap TV Provider.

How to watch Schitt's Creek season 6 in Canada

Oh, Canada, watching Schitt's Creek season 6 is a total breeze for you! Yes, you've got the CBC channel, where the show regularly airs. No difficulties at all.

Watch Schitt's Creek on Netflix: When is Season 6 coming?

I've got some good and bad news. You'll probably be able to watch Schitt's Creek season 6 on Netflix (it's had the first 5, so the trend should continue), but you might have to wait a bit. What's On Netflix is predicting U.S. Netflix fans will wait until October, and that those in the U.K. and Australia will get it a little earlier: around May.

But there's trouble a-brewing in the relationship that could get in the way.

CBC president and CEO Catherine Tait told the podcast Content Canada that "We’re not going to do deals that hurt the long-term viability of our domestic industry. A number of countries have done deals, as we did, with Netflix … and over time we start to see that we’re feeding the growth of Netflix, or we’re feeding the growth of Amazon, rather than feeding our own domestic business and industry."

But for now, if you've yet to check into the Rosebud Motel, you don't have to wait to catch up. You can watch Schitt's Creek on Netflix right now, as the streaming titan has the first five seasons of the show for your binge-watching pleasure.