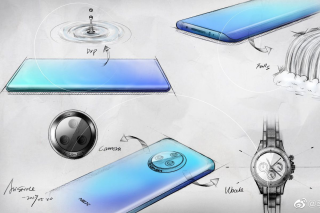 Samsung may have put the final nail in the 3.5-millimeter minijack’s coffin, but there’s a tiny band of small manufacturers that are resisting what seems inevitable. The latest one: Vivo.

The Chinese manufacturer is known for its experimental flagship phones. In fact, I would say that Vivo is perhaps the company that takes more risks that anyone else. It introduced pop-up cameras and in-display fingerprint scanners for the first time, adopted dual-screen phones, and made this completely seamless phone with a sound-emitting vibrating display with no ports whatsoever.

Which is why the announcement of a 3.5-millimeter jack in the upcoming Vivo NEX 3 flagship is quite shocking. According to a post by Vivo NEX product manager, "the 3.5-mm headphone jack will be in the future NEX flagship."

The phone — which you can see in sketches above — will also have a display with a tight curve on the sides. And, from the look of it, it may have an in-display or a pop-up selfie camera. Check out the glass Vivo will use, which shows no punch holes or water drops.

Why is the vanguardist Vivo adding a technology to a flagship that has been effectively deprecated by the top 5 manufacturers in the world — Samsung, Huawei, Apple, Xiaomi, and Oppo? Even Sony got rid of it.

Perhaps small manufacturers with single digit market shares are looking for ways to distinguish their flagships from the Big Five’s. Like LG and its upcoming LG G8x ThinQ, the Asus Zenfone 6Z or this future Vivo NEX.

It may not be that, but that seems like a plausible answer. And, while I don’t know how long this is going to last, it’s good that there are still options available for people who want a flagship with a 3.5-mm minijack.