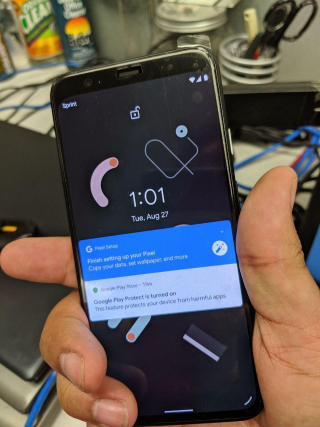 Behold the Pixel 4 fresh out of the box, still clad in its protective plastic. It looks just like the renders, including the forehead that holds the facial ID sensors, a selfie camera, and its unique Soli radar sensor. And it looks much better than any notched iPhone.

On the back, however, there’s the same square camera bump that the iPhone 11 reportedly has,. The patch holds two cameras and the flash. If you look at it from a distance, you could confuse it with renders for the upcoming iPhone.

Mishall Rahman, the guy who shared it on Twitter, labels them as alleged: “These images of an alleged Google Pixel 4 just started floating around on Telegram. No idea of the true source or if they're legit.” They do look 100% legit based on what Google has shared so far and all the leaks from other credible sources.

The forehead contains an infrared and depth sensor array to do the same kind of facial ID that the iPhone uses. It also houses Soli, an advanced radar sensor that will allow you to control your phone’s features with Doctor Strange-style hand movements. The Pixel 4’s OLED screen may feature a 90Hz refresh rate for extremely smooth video and animations.

On the back, the camera patch allegedly houses two sensors with resolutions of 12 and 16 megapixels.

The Pixel 4 is expected to launch sometime in October, perhaps on Tuesday October 8, with availability on October 17. There are no rumors about price yet but, with the poor sales of the Pixel 3 and Pixel 3XL, I doubt they will cost more than today's flagships.

Check out our Pixel 4 news and rumors hub to get caught up on all of the leaks, specs and features prior to launch.