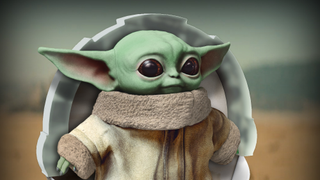 Around the Tom's Guide offices, we've been waiting for weeks to learn about when we'll get the chance to buy an official Baby Yoda plush. Thanks to a Walmart leak, we saw it coming before it actually hit — and then today we just saw the ship date move up.

The full press image of the Baby Yoda plush, which features a vinyl head, arrived via the prolific games/culture tweeter Wario64, who published it (alongside a link) earlier this morning. And while it was hard to order at first, there are no problems anymore — plus, original estimates put this Baby Yoda toy delivering on May 24, and it's now slated to arrive on April 1.

The Child (aka Baby Yoda) plush: $24.99 at Walmart
Multiple members of the TG team have already pre-ordered the most adorable member of The Mandalorian's crew — though it's kinda slim pickings other than The Child. View Deal

Soon thereafter Funko just revealed two Pop! models. One is more normal sized The Child, the other is a 10-inch supersized edition. Walmart sold out of the smaller one, but the larger model is still around for pre-order:

10-inch The Child (Baby Yoda) Funko POP!: $29.96 at Walmart
We don't think of Baby Yoda as huge, but this 'Super Sized Pop' takes Mando's copilot to a scale much larger than any normal Funko POP!. Unlike with the plush, this toy is scheduled to deliver in May.View Deal

Keep it tuned to Tom's Guide for all your Baby Yoda needs -- we'll be sure to update this story once the product goes on sale officially.