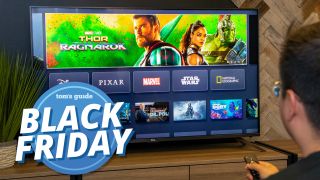 Black Friday has arrived, and the deals are rolling out for discounted streaming services. Sure, Disney Plus doesn't offer a Black Friday deal of their own, but that doesn't mean you can't snag that service at a discount.

Thanks to a handy holiday loophole at Best Buy, you can purchase $100 iTunes gift cards for 20% off—then use said gift cards to purchase a Disney Plus subscription through Apple TV.

As we mention in our Disney Plus review, Disney's streaming service already offers tons of content at an affordable price ($6.99 per month). It has a smooth, elegant interface, making it easy to navigate all your favorite Star Wars, Marvel, Pixar, and National Geographic content—not to mention your favorite Disney titles, of course.

Another draw of the service is Disney's inclusion of original content, such as The Mandalorian, High School Musical: The Musical: The Series, and The World According to Jeff Goldblum. (This library is modest at the moment, but building.)

Can't get enough Star Wars? The Force is especially strong with Disney Plus. In addition to the original trilogy (Chapters 4, 5 and 6), Disney Plus Star Wars movies include the prequels, The Force Awakens and Rogue One: A Star Wars Story. You'll also find The Clone Wars Saga show, Star Wars Rebels, Star Wars Resistance, and multiple Lego Star Wars shows (including Droid Tales and All-Stars). There's even a 2-hour documentary (from 2004), Empire of Dreams: The Story of The Star Wars Trilogy.

Be sure to keep it locked to Tom's Guide for the best Black Friday and Cyber Monday deals of the week.