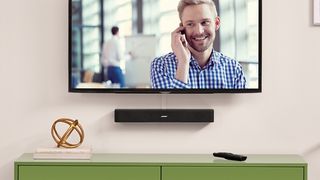 If you want to get the most out of watching movies, TV shows, and gaming on your HDTV, a soundbar is the way to go. And for a limited time, you can own one of the best soundbars around for a discounted price.

Amazon currently has the Bose Solo 5 TV Sound System on sale for $199. That's $50 off its $249 list price and the second lowest price we've ever seen for this audio system. It's also one of the best soundbar deals we've seen this month. (Walmart also has this soundbar on sale for the same price).

Bose Solo 5 TV Soundbar: was $249 now $199 @ Amazon
The Bose Solo 5 is a Bluetooth-enabled soundbar that can boost your TV's audio and wirelessly play tunes from your smartphone or tablet. For a limited time, it's $50 off.  View Deal

The Bose Solo 5 features Bluetooth technology and includes a handy universal remote control. This makes it easy to customize the soundbar's bass level and control connected video sources like your DVR or Blu-ray disc player.

The Bose Solo TV Sound System also connects to your Bluetooth-enabled smartphone or tablet so that you can wirelessly stream music from your device.

The Bose Solo 5 features a special "dialogue mode," which accentuates spoken words while you watch your favorite movies. This function is great for watching movies at night when you don't want to have the volume too high.

Amazon doesn't specify an expiration date for this Bose deal, so we recommend you grab it while you can.