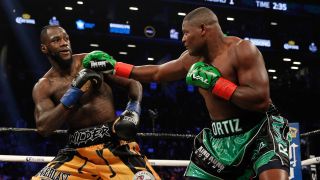 And now, your main event of the evening! Now that "El Terremoto" has won the WBA Super Featherweight belt, we're mere moments away from the hyped Deonte Wilder vs Luis Ortiz rematch. All of boxing is asking the same question: "Can Ortiz actually do it?" Yes, the champ's next opponent is already practically-set, but Cuba's King Kong won't be a push-over. So, join us fellow fight fans, in finding a Wilder vs Ortiz live stream to see how this bout plays out.

Tonight (Nov. 23) at the MGM Grand Arena in Las Vegas, the fights have begun. With the undercard over, the main event is expected to go live in moments, with many believing 9pm PT local time aka Midnight Eastern. And that's going to be at 5am GMT — Sunday morning — for fight fans tuning in from the UK.

For those who need a refresher, Ortiz and Wilder's first fight went 10 rounds deep, and seemed to give the challenger the early nod. But in that 10th round back in March 2018, Wilder ended things with a decisive TKO.

With that win, plus a beyond-impressive unbeaten record that's gone 42 fights long, you would be forgiven for thinking Wilder can look past Ortiz. In fact, the champ's next opponent is already penciled in to be Tyson Fury, who just spent a cup of coffee's time in WWE, getting a big pay day in Saudi Arabia and jaw-jacking on Fox.

Ortiz is definitely the underdog, with a shorter reach (78 inches to Wilder's 83 inches) and height (6-foot-3 to Wilder's 6-foot-7 frame). Ortiz is also older, with 40 years that might leave him with a slower step than the 34-year-old Wilder. The keys to his victory likely lie in the fifth round of their first match, when Ortiz nearly closed the door on Wilder.

So, with that bit of history out of the way, let's figure out how to watch Saturday's big bout. Here's everything you need to get a Wilder vs Ortiz live stream, no matter where you are in the world. We've also got notes about who's won the undercard matches.

How you can live stream the Wilder vs Ortiz fight anywhere

If you're still trying to figure out who's showing Wilder and Ortiz fight in your country, you can just scroll down (we're nearing the midnight hour!). But if you're on vacation and confused about your options, or trying to work around geolocation-based restrictions, you might need a VPN to catch this match. A virtual private network will make your laptop appear as it's back at home, you can access your streaming services you already paid a pretty penny for.

We've tested many different options, and our pick for the best overall VPN is ExpressVPN. We like its customer service, and it performed well in our testing. But while ExpressVPN may be our recommendation, you have a few other options.

ExpressVPN: Express VPN can access more than 3,000 servers spread out across 160 locations in 94 countries. The service performed reliably in our testing, and we found customer service responsive.

Who is broadcasting the Wilder vs Ortiz fight in the US?

Here in the States, Wilder vs Ortiz is only available on Fox Sports, though it's being sold separately via Fox PBC. Experienced fans are already wincing reading that, because they've paid a lot of cash for PPV fights before. Tonight's no different, as Wilder vs Ortiz costs $74.99.

How to live stream Wilder vs Ortiz from the UK

Fight night fans in the United Kingdom are far more fortunate when it comes to Wilder vs Ortiz live stream pricing. Those with Sky Sports TV get the fight for free, with the only price being a good night's sleep. I don't envy those waking up at 5 a.m. to watch a fight (though I've done far worse to watch live pro wrestling from Japan). Tune to Sky Sports action to see the fight.

If you don't pay for Sky Sports, a small one-time purchase is your way to watch the fight. NOW TV sells 1-day Sky Sports Passes, for just £9.99 (ignore the promo for a month pass and click Buy Day Pass at the top). And that means you've got that subscription for the rest of the day to watch some football.

How to watch Wilder vs Ortiz live in Australia

Even Aussies get a better deal than Americans. Main Event PPV is selling Wilder vs Ortiz streams for $49.99 AUD (and that includes replays). Time zones benefit Australia the most, with the fight starting at 1 p.m. AEDT.

Who else is on the Wilder vs Ortiz 2 card?