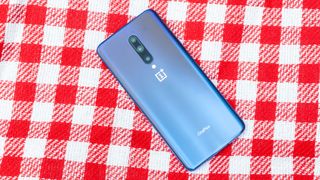 It’s still less than a month since OnePlus launched the OnePlus 7T, and just over a week since it launched the 7T Pro, but renders of OnePlus’ next smartphone have once again emerged.

The new renders, produced by OnLeaks in association with 91Mobiles, show the OnePlus 8 Pro. OnLeaks worked with another website, CashKaro, to show off the earlier renders of the standard OnePlus 8, which were also based on leaked drawings.

While the shape of the OnePlus 8 Pro in these images looks very similar to the shape of the OnePlus 7 Pro, the first thing you’re likely to notice is the punch-hole camera. The 7 Pro is notable for having a pop-up selfie camera, so it’s odd that OnePlus appear to have decided to change direction to make both of its handsets look similar. The display itself is a 6.65-inch curved affair, which is a touch smaller than the 6.67-inch screen on the 7 Pro and 7T Pro, but it will keep the high 90Hz refresh rate.

The phone's back has once again kept the central vertical camera bump which the OnePlus 8 appears to be also getting, but adds on top of that a TOF sensor to the right along with the laser autofocus sensor.

The 7 Pro and 7T Pro currently use a 48MP main sensor, 16MP ultrawide sensor and 8MP 3x optical zoom telephoto sensor. So it’s not a wild assumption that OnePlus will keep the same camera functions, but will upgrade the hardware to better compete with photography phone leaders like the iPhone 11 Pro or Galaxy Note 10.

On the whole though, there doesn’t seem to be too many drastic changes coming to OnePlus’ top tier handset next year. On one hand, this is great because the 7 Pro is one of the best smartphones available. However, considering how minor the upgrades to the 7T Pro were, you may have been hoping for some bigger changes between the 7 Pro and 8 Pro. If you’re in that camp like me, let’s just pray that the big upgrades are going to be hidden in the hardware and software and will reveal themselves in due course.