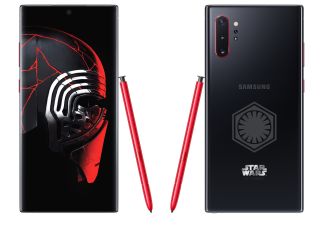 Star Wars fanatics who've found themselves far, far way from a new Galaxy Note may want to mark their calendars for Dec. 13. That's when Samsung plans to release a special Star Wars-themed version of its Galaxy Note 10 Plus, complete with a lightsaber-red S Pen.

That Dec. 13 release date for the $1,299 phone is no accident. The Galaxy Note 10 Plus Star Wars Special Edition arrives a week before the Dec. 20 premiere of Star Wars: The Rise of Skywalker in movie theaters.

Samsung promises "Star Wars-inspired design elements and digital content," which will include wallpapers, shutdown animations, icons and sounds. (Please tell us that the Note 10 Plus will admit an R2D2-like shriek when it shuts down.) The phone will also ship with a special Note 10 Plus case, a set of Galaxy Buds, and a metal badge that Samsung touts as a collector's item.

It's the red S Pen that caught our eye, though. Since red is the preferred lightsaber color for the likes of Kylo Ren and various and sundry Darths (Maul, Vader), we're not sure if Samsung is suggesting its phablet is only appropriate for those who choose the Dark Side. Or it could just be that red is a striking color. We try not to judge.

You'll enjoy top performance for an Android phone, thanks to the Snapdragon 855 processor inside the Note 10 Plus, and you'll also benefit from features like the S Pen (Sith-favored color or no) and DeX compatibility where you can sync up your phone with your PC using just a USB cable.

At $1,299 — we're not sure what that translates to in Galactic Credits — the Galaxy Note 10 Plus Star Wars Special Edition costs $200 more than the standard Galaxy Note 10 Plus (and $350 over the 6.3-inch Galaxy Note 10). It will be available through Amazon, select Best Buy and Microsoft stores, Samsung.com and the Samsung Experience Store on Dec. 13.