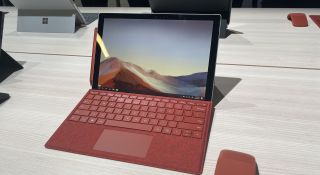 Best Buy is giving us a quick peek at its Black Friday deals with a limited time discount on the new Surface Pro 7.

Currently, you can get the new Microsoft Surface Pro 7 with Black Type Cover on sale for $599. Normally priced at $959, this deal saves you $360. It's one of the most head-turning early Best Buy Black Friday deals we've seen.

Microsoft Surface Pro 7: was $959 now $599 @ Best Buy
This new Surface Pro 7 sports a 10th-gen Intel Core i3 CPU. It also comes bundled with Microsoft's Type Cover, so you can use it as a laptop or tablet. On sale for $599, it's at its lowest price ever.
View Deal

Sister site, LaptopMag reviewed the Surface Pro 7 and liked its premium metal build, fast performance and bright, color-rich display. They gave it an overall rating of 4 out of 5 stars.

With a convertible design that goes from tablet to laptop in a snap, the Surface Pro 7 is a great iPad Pro alternative. At $360 off, the Surface Pro is now also the cheaper option, so act fast to snag this rock bottom price.

For post Black Friday deals, be sure to check out our Cyber Monday deals coverage.