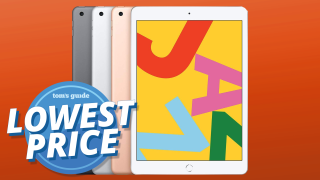 Now you see it, now you don't. That's been the way people looking for a great deal on Apple's latest tablet must have felt this weekend, as the iPad keeps emerging and then disappearing at its lowest price ever.

As of this writing, you're in luck. Target is selling the iPad for just $229. That's $100 off the 10.2-inch seventh-generation tablet with 32GB of storage. The Silver model is not available, but Space Gray and Gold versions of this iPad are still in stock in a deal we had expected to disappear on Saturday night.

Apple 10.2-inch iPad: was $329 now $229 @ Target
Get the new iPad now at the lowest price ever. Apple's most popular tablet now sports a bigger screen and support for Apple's Smart Keyboard. You also get long battery life and Touch ID. With this $229 iPad deal, you'll save $100. View Deal

Target isn't the only place to find a discounted iPad in the build-up to Cyber Monday. Amazon has been offering a $229 iPad as well, though that model keeps going in and out of stock. Check the retailer frequently to find out if the status has changed.

The iPad is the best tablet for most people, thanks to its bright and sharp Retina display, fairly speedy A10 processor, and support for both the Apple Pencil and Apple's keyboard. The iPad also comes equipped with a Touch ID sensor and a 8-MP rear camera and 1.2-MP front camera.

The 10.2-inch iPad also offers 10 hours of battery life, so in most cases you can leave the charger at home.

Be sure to check out all the other big Cyber Monday deals on our hub page. And we're tracking the best iPad deals for Cyber Monday, too.